‘We’re Getting Near a Tipping Point’ in Education: David Osborne on ‘Reinventing America’s Schools’ 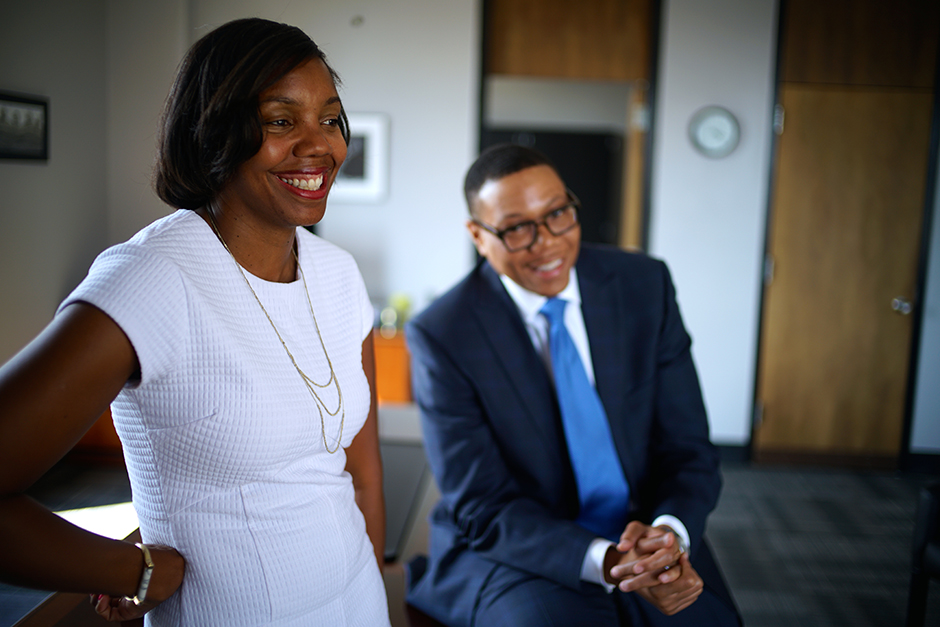 David Osborne’s eyes light up when he talks about proof.

A nationally renowned public policy reformer who is best known for writing the New York Times best seller Reinventing Government: How the Entrepreneurial Spirit Is Transforming the Public Sector, and who now serves as a director of the forward-thinking Reinventing America’s Schools project at the Progressive Policy Institute. He has an animated tone and a sparkle in his eye that suggest this particular proof is especially compelling.

And not just that, it’s living.

The proof he’s talking about is the significant, life-altering student achievement gains in big cities across the country, including New Orleans, Denver, and Washington, D.C., which have embraced innovation full force in recent years in an effort to reinvent public education.

In his new book, Reinventing America’s Schools: Creating a 21st Century Education System, which is out September 5 along with an immersive multimedia experience curated in partnership with The 74, David vividly and specifically unpacks his theory of how U.S. education must be redesigned and sketches out a road map for cities and policymakers across America to adopt.

“I think we’re getting near a tipping point,” he said. “I think this model is going to spread to more and more cities over the next five years, 10 years. I think we now have proof.”

Osborne spoke with The 74 about his new book and the political courage it takes to make decisions in the best interests of children.

This interview has been edited for length and clarity.

Explain your journey from Reinventing Government, a New York Times best seller, to Reinventing America’s Schools. What inspired you to commit all your public policy reform efforts to education?

Reinventing Government basically argued that given the shift from an industrial economy to an information age, institutions of all types were changing. We, my co-author Ted Gaebler and I, described the changes we were seeing in the public sector.

It was very commonsense things, like going from monopolies to competition. Going from ignoring results to measuring results, and paying attention to results. Going from hierarchical centralized institutions to more decentralized institutions. Pushing authority down from the feds, to the states, to the locals. Moving more of the operational decisions down closer to the customer, to front-line employees.

At the end of the book, I said, “Let’s take these 10 principles, and let’s apply them to our three biggest domestic problems.” I chose public safety, because crime was so bad then, education, and health care. With education, when you apply those principles, what you get is, in essence, a district made up of charter schools — in which parents have choices, schools have to compete, money follows children, and schools are free to create what they want and run their own institutions.

The first charter school bill had just passed, but the first charter school was not open. So I didn’t describe it in terms of charters, I described it in terms of contracts. I was convinced at the time, that’s what would work, that’s the future. I think the only person who actually noticed that argument was Paul Hill, who got inspired by it, created the Center on Reinventing Public Education, and did a ton of work on that notion and began to call it the portfolio model.

Otherwise, pretty much it was ignored. I was on a commission in 1999 that ECS put together, the Education Commission of the States, a commission on governing America’s schools. There were a bunch of us reformers on it, and we put out a report advocating this model, an all-charter model. Again, it was like we had thrown a rock into a pond and there were no ripples. Nobody really noticed. It was like we were talking about Mars. It was just way too far ahead of where people were.

In 2010, I was doing some consulting work for the newly elected mayor of New Orleans, Mitch Landrieu, and I discovered what was going on in New Orleans with education, that they had adopted this model. The results were astounding. I then looked at Washington, D.C., and realized, “Wow, it’s really working there.”

I began looking around at other cities and realizing that we now have proof. We have cities doing this, and it’s working, in places like New Orleans, and D.C., and Denver. I just thought, “Wow, finally, maybe since we have examples and we have proof, maybe people can hear the argument now.” I’ve been preaching it for a long time. I just thought, “It’s time to write a book.”

Is the argument you make in the book partisan? Is education reform partisan?

In recent years, the teachers unions have become so anti-charter that it has split the Democratic Party on the issue. People think, “Well, more Republicans support this.” But, this was a Democratic idea.

People have forgotten that in the early ’90s, the Republicans were pushing vouchers hard. They had a ballot initiative in California to convert the entire education system to vouchers, in 1992, for example. It lost. This was the Republican Party’s agenda.

Democrats realized, “We can’t fight something with nothing. We need a reform. We know these systems are bad. They’re not good enough, we’ve got to improve them. We need something.” People in Minnesota invented the charter school idea. It was influenced by a variety of people, including the president of the American Federation of Teachers, Al Shanker. It was a small group of activists in Minnesota, most of whom were Democrats, not all, but most of whom were Democrats who convinced some state legislators, who were Democrats, to push a charter bill through the state legislature.

In the early years, it was like 80 percent Democrats pushing this idea. Then, after five or 10 years, the teachers unions woke up to what a threat it appeared to be to them, because most charter schools are not unionized. More than 80 percent of them are not unionized. As they grow, teachers unions shrink. It’s a direct threat to the union. Not to the teachers, but to the union. They drew a line in the sand and decided to fight charters everywhere, in any way possible. That means a lot of Democratic elected officials won’t support charter schools anymore, which has changed the perception. Some will — President Obama was very pro-charter. But others won’t.

Your new book, Reinventing America’s Schools, is out September 5. What can we expect from it?

They’re watching, and it’s beginning to spread. Other cities are doing similar things.

Which cities are the ones to watch?

Probably the most outstanding example is Indianapolis, which actually got started in 2001, when the state legislature passed a charter bill and allowed the mayor to authorize charters. He hired some good people, they created an authorizing office, and they’ve done a great job. There are now almost 40 charters authorized by the mayor in Indianapolis, and they’re outperforming the district.

A few years ago, the school board and some activists in town decided, “This is what works. Let’s figure out how to do this with the district.” They got a bill passed allowing the district to create what they call Innovation Network Schools, which are district schools, except they’re organized like charters. They’re even not-for-profit organizations with their own boards. They have five-year contracts with the district, just like a charter does. Now, pretty soon there are going to be over 50 percent kids in charters or charter-like Innovation Network Schools in Indianapolis.

The city of Camden, New Jersey. The state took over because the district was so bad, and they hired Paymon Rouhanifard, who’d worked for Joel Klein when he was chancellor in New York City. They call them Renaissance Schools; they take existing public schools and they ask outstanding nonprofit charter networks like Mastery and KIPP to operate those schools.

In all these cases, what motivates it is desperation. These districts were all really bad and had tried everything. We’ve been doing education reform since the ’80s; all other traditional medicine had been tried. Some of it helps a little, but nothing is fundamental, because it doesn’t fundamentally change the dynamics that affect schools. It doesn’t give them the right incentives, it doesn’t empower the people who run them to actually change what’s happening in that school, but the charter model does.

There’s a lot of interest because when you see the best results in the country, even though it’s politically tough, that’s what you want to do if you care about the kids.

What is your theory on why it’s working so well?

I spent a lot of time over the last 25 years trying to figure out why this model works better. I think the answers are …

One, when schools have autonomy, when the people who run the school have the power, the authority to make the decisions, to decide who to hire, how much to pay them, who to fire, who to promote, how to structure the school, what kind of learning process is going to work for these kids that they’re trying to educate. When they have the authority to do that, we get better results.

Accountability’s the second. Accountability for performance. With the charter model and charter-like schools, if the kids aren’t learning, the school is supposed to be closed…That creates an entirely different culture and sense of motivation and urgency than a traditional public school, where most of the teachers have jobs for life because they have tenure.

The fourth big thing is changing the politics. When the district doesn’t operate the schools, when it has contracts with nonprofit operators to operate the schools, the decisionmakers are free to make decisions in the best interests of the children, rather than the adults. If you’re running a big district and you’ve got thousands of adult employees, and they all vote in school board elections and not many other people vote in school board elections, you can’t afford to get them angry—otherwise you’re going to lose your job.

Traditional districts change very slowly, because they can’t afford to anger any adults. In charter systems, they change rapidly, because the schools have to perform, or they go away. The decisionmakers are politically free to make those decisions, to replace this failing school with a school run by this other operator who is outstanding.

What do you want people to take away from the book?

There’s almost nothing more important to the future of the quality of life in the United States as education. We’ve been losing that quality of life, as the Industrial Era died and the Information Age was born. That’s why inequality is growing in the United States, that’s why so many people who used to have great jobs, union jobs, working in factories, no longer have jobs or are working for half or a third of what they used to make.

Fifty years ago, we had the best public education system in the world, but no longer. Even in higher education, which was really our secret for a long time, other countries are competing now.

I think we’re at a point now where we see the solution. This model of treating schools like charters, of having nonprofit, contractual relationships with them rather than an employee relationship with them—the magic of that is that the elected school board is no longer politically captive of its employees.

I think this reform is what unlocks the door and is going to allow us to double the effectiveness of our schools, for the same dollar. I think we now have proof. I think we’re getting near a tipping point. I think this model is going to spread to more and more cities over the next five years, 10 years.