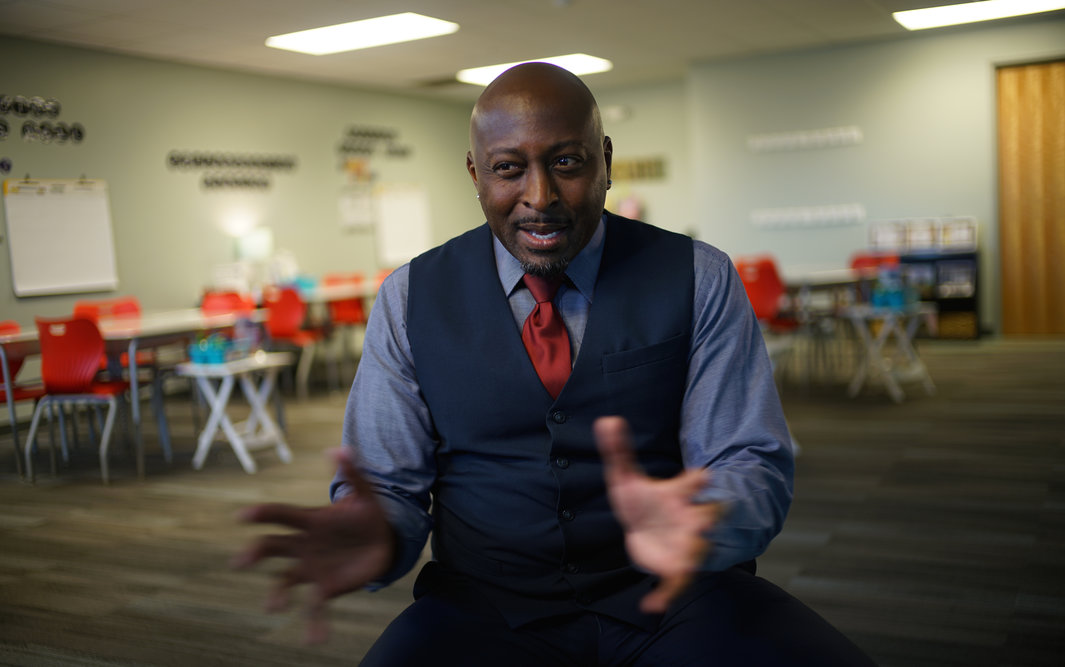 Francis Scott Key Elementary School 103 had been rated F by the state for five years. In its neighborhood, nearly of third of residents had annual household incomes of less than $10,000. The school had one of the most transient and violent student bodies in the city. In its final year, 2014–15, 73 fights erupted, more than in any other IPS elementary school. Enrollment had fallen from 527 to 341, and only 11 students passed the state exams. “Every single classroom was chaotic,” says Earl Phalen, who took it over. “Literally 13 of our sixth-graders, on the pretest, were at kindergarten or first-grade levels. They couldn’t spell their names.”

Phalen, an African American who graduated from Yale University and Harvard Law School, already ran one charter elementary in town and had charters to open nine more. The Mind Trust had first enticed him to town to create a summer program for thousands of teenagers, then had recruited him to launch a charter. Of the innovation school he says,

We knew it had to be done well, because if it wasn’t, the notion of innovation schools would take a severe hit. It was sooner than we wanted to do a turnaround, and everybody said turnaround is tougher than a charter. The risk is that you’re taking on the whole school, and you have to believe that you can get third-graders and fourth-graders and fifth-graders who’ve been in a chaotic environment for five, six, and seven years to actually behave up to your expectations. But we had done summer programs with kids from seven different gangs, and we put them on one campus. So I wasn’t scared about being able to set the culture. We can set culture.

Francis Scott Key had 53 teachers. Phalen says he told them kids were going to grow 1.5 years per year, academically, but they didn’t believe it. So he didn’t hire any of them—“Because they didn’t have the fundamental belief in the kids they were serving.” He and the principal, Agnes Aleobua, hired 42 new staff members and had the dingy old school renovated, with new desks, carpeting over the old tile, and bright new paint on the walls. They assigned a teacher and an assistant to most classrooms—then let two of them go within the first few months. “We cannot waste a year of a child’s life while a teacher tries to figure out if they want to do this,” Phalen explained.

They invested heavily in getting parents involved: having teachers do home visits before school started, hiring parent advocates, creating a breakfast program for fathers and their kids (designed by a former Indianapolis Colts coach, Tony Dungy), and inviting parents to regular events at school.

After six months, Phalen told me, “We’ve got the culture straightened out; now we need to get the academic piece fixed.” By the time state testing rolled around, the percentage who passed IREAD—a third-grade test that has not changed in recent years—had doubled, from 30 to 61 percent.

While Phalen reinvents the school, the Glick Philanthropies have launched a comprehensive effort to turn around the broader area. Called the Far Eastside Success Initiative, it is a partnership with the United Way of Central Indiana, Central Indiana Community Foundation, and IPS. It will involve housing, free preschool, college scholarships, a food pantry, adult education and training programs, and health care and public safety initiatives.

Gene B. Glick was a builder who constructed many of the homes and apartments in the neighborhood, beginning in the 1950s. His family says it is prepared to make a 20-year investment in the area, which also houses a high school. Already it has purchased an apartment complex he built and invested $5 million in improving it. It has given School 103 more than $1 million over the first two years to help with renovation, staff recruitment and training, parent advocates, and pre-school. At the high school it has invested $40,000 in college scholarships and $60,000 to support a restorative justice discipline program.

This year Phalen took a second innovation school under his wing, but on a slightly different basis. School 93 is run by a group of teachers who call themselves Project Restore. As Phalen tells it, this is “an incredible group of teachers who eight years ago were at another school, School 99, and said, ‘You guys keep handing us down all these initiatives. You don’t have any idea what works or doesn’t work because your feet have been so far from the ground. Let us run the school.’” The principal agreed, and “with the exact same teachers, they took the school from an F-rated school to an A-rated school in one year. So the superintendent, Dr. White, said, ‘Why don’t you try that again?’” They turned that school from an F to a B in one year, an A the next year.

Dr. Lewis Ferebee, Indianapolis Public Schools superintendent, encouraged them to bring their model to School 93, which they moved from an F to a C in their first year, 2014–15. When they decided to pursue innovation network status through a Mind Trust Educator Empowerment Grant, they didn’t want to spend time building a new 501(c)3 organization and a board. So they joined Phalen Leadership Academies, reporting to its board.