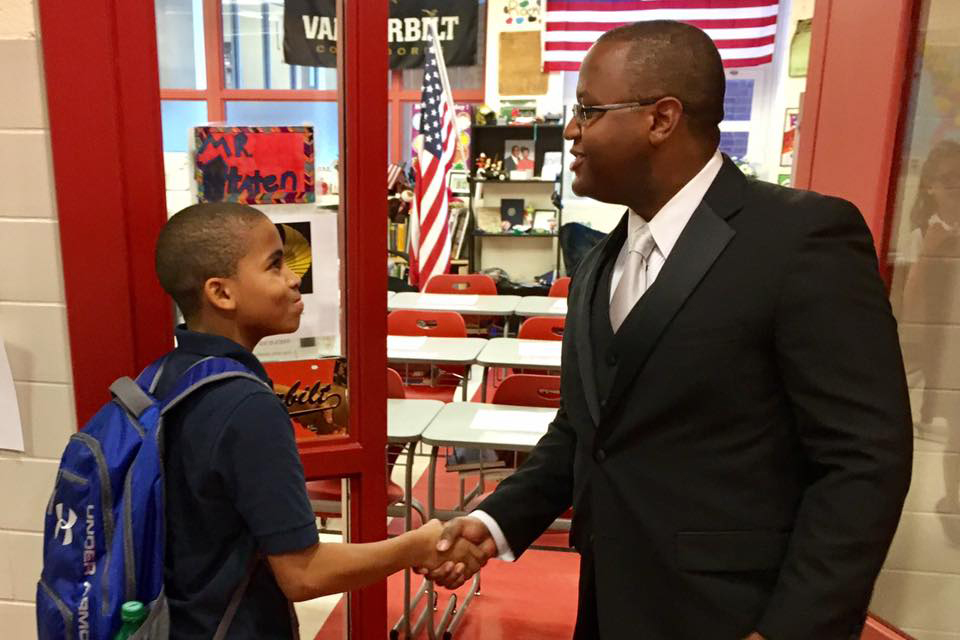 Diana Smith, principal of Washington Latin Public Charter School in Washington, D.C., received a lot of press this summer when her No-Tech Tuesday Challenge caught the interest of the media, educators, and parents.

At the end of the last school year, Smith challenged the 160 eighth and ninth grade students at WLPCS to stay off of their screens, including televisions, all day every Tuesday during the summer — from June 13 to August 22, 2017. She promised to give each successful student $100 out of her own pocket.

Last week, when WLPCS opened for the new school year, Smith awarded $3,400 dollars to 34 of the 38 successful students.  (Four students declined the momentary reward, but all students gained something).

WLPCS is a Classics-based school with a clear mission and impressive reputation. A Tier 1 public charter school, the school uses a classical approach to education to help students distinguish between information and knowledge, to engage in public forums and Socratic seminars, and to develop character, which WLPCS defines as the intersection of intellectual and moral development.

And, yes, each student must take Latin.

The success of the school comes from the hard work of many educators and involved parents, but no one can overlook the role that Smith — imbued with creativity and sense of purpose like her No Tech Tuesday Challenge — and her strong leadership plays in the school’s achievements.

Reinventing Schools’ Emily Langhorne recently spoke with Smith to discuss what makes WLPCS unique. The following interview has been edited for length and clarity.

Q: You weren’t the principal of Washington Latin Public Charter School when it was founded in 2006, but you came on board when the school was still in its infancy. How did you find your way to Washington Latin?

I interviewed at four or five charter schools, and this was the one that was most closely aligned with my beliefs and background. I have a background in Classics, so it was a very interesting experience for me to have someone actually say, “Here’s a school devoted to everything that you believe in.”

This devotion to a Classics-based education makes Washington Latin a unique place in terms of school culture. Can you describe the school’s culture and explain how the school works to mold and maintain that culture?

I think the culture of the school is the most salient characteristic of the school. The culture that we’re aiming for is warm, boundaried, and intellectual. I think all three of those are very intentionally developed. We just had a new employee who said after a week of being here that the “thing most obvious to me here is the intentionality.”

The warm is through a variety of, well edict isn’t the right word, but my wish is that adults do not yell at children, ever. I am very strict about that. Boundaried is just what it sounds like: I believe that limits are freeing. And the intellectual part is the part that I think a lot of traditional public schools are missing, and that is the idea that we are in the service of some really extraordinary ideas so you need to create culture through allowing the faculty to talk about and think about the things that excite them and drew them to the intellectual life in the beginning.

How has being a public charter school, versus a traditional public district school, allowed you to create this special school culture?

First of all is the class size. It’s the most expensive thing we offer and so we have an average class size of 16 to 17, and we really try not to have classes go over 21 [students]. From what I know [in a traditional district school], I wouldn’t have had any control over that.

I hand-schedule every single child in this building — that’s 700 kids. That also wouldn’t have been possible [as a traditional district school]. We do that in order for us to be able to put kids together in combinations that would be productive for them and with teachers who would be good for them. That’s another really intentional part that I don’t think would have been possible.

We talk about controversial issues; we actually lean into them on purpose. I don’t know that that would have been possible in a traditional public school, maybe I’m wrong.

I think the biggest issue is size. I think that one of the reasons our high school has been so successful is that it’s small, and kids who at that age are yearning for anonymity aren’t able to be anonymous here.

You mentioned hand-scheduling the students. Are there other things you do like that which are unique to Washington Latin?

Yes. Socratic seminars, which are a part of our pedagogy that is deeply imbedded now, which can only really happen with small classes — everything we do is an extension of small size. That’s one thing.

We do have an advisory program, which is homeroom for older kids, basically, where every adult has 10 to 17 student advisees that they are responsible for.

If you had a chance to talk with people who were anti-charter, for whatever reason, is there anything specific you’d want to tell them?

“Come visit,” I think is the first thing I always say when I enter into conversations about people who are anti-charter — I happen to have some in my own family — and I’ve just said, “Come see and see if you think it’s working.” It just does a whole lot more to put them around the kids than to talk to them about it.

But I think that the freedoms that I’ve had as a principal here I wouldn’t have had in other areas. It’s crucial that I have the ability and autonomy to hire who I want to hire and to devise an evaluation system that allows me to remove the people who aren’t doing what they’re suppose to be doing.

Because I’ve only spent my life in independent schools or public charter schools, I don’t know what it’s like to not have the autonomy of a leader in a school building. I can’t imagine what that would feel like.

Giving me the autonomy to create a culture that I know works is a good thing. One of the things that we’re trying to do here is to create that private school atmosphere with public school students, and we’re trying to do it in a socially responsible way. That works. Small schools work for private schools; it’s actually the thing that they’re selling. I just couldn’t do what I’ve done without the autonomy that I’ve had.

How do you feel about school choice and the role that it should play in public education?

I think choice, despite that it might have some flaws theoretically, in practice is an extremely healthy and necessary thing. I’ve seen the [traditional] public schools in this city respond in some way, in many ways, to what the charter sector is doing, and I feel that there is a good relationship between [traditional] public and charter in this city.

The charter school movement was really started as the R&D department of education, right? It was started as an educational idea so that people would experiment and figure out ways to educate. There are many who are worried that there is something about charter schools that is not public. I can’t tell you how many people come into the building and say, “So what are your admissions criteria?” who don’t understand that charter schools are entirely public schools.

What are some of the biggest challenges you’ve face in running a public charter school?

You know, I’m down on the ground and in amongst the kids, so always on my mind is the students who are struggling. I think the more I do this the more I realize the biggest challenge is parent education. First of all, we have to get beyond the discussion about whether it’s a school’s responsibility to help parents know how to be better parents such that kids will get an education. Once you have that conversation, then having to figure out exactly how to help parents be better parents is not an easy thing. The at-risk kids here, I would like to be able to help their parents help us, and I would like to be able to form a partnership. That’s a challenge, working with the parents of our at-risk kids.

The other challenge is just financial. That is making sure that we can maintain this small-class-size model. We give up a lot for that in terms of help. One administrator in this building has an assistant, one, so that’s one of things we have given up. And that’s a challenge. The facilities continue to be challenge: not having enough space and then the cost of creating more space. Those are the three that have been most on our minds.

What would you consider the greatest success of Washington Latin?