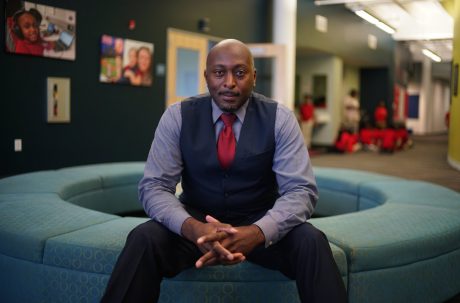 We're at 89 percent. The good news is, if our scholars don't feel that somebody cares about them, that is a huge determiner of whether that staff member will be back with us next year.

I think love is central. In some schools they may not talk about it as love. If I have high expectations of you, that's a form of expression of my belief in you, that could be construed as being love. I think all children need to feel like somebody just thinks they are the greatest that they can be. I went to all-white high school, and I was suffering a little bit with self-esteem issues, and racial identity. Mr. Powell — it was open door — I never had him as a teacher, but every day he would just say, come on in during your free period. We'd talk about issues. And he was just pouring into me this — I mean, looking back on it — this belief that, you are special. The only reason I went to Yale was because Mr. Powell was like, 'Yeah, you can apply to Yale, Princeton, Penn.' And I was like, 'All right. I'll try that.'

So we want to make sure in our buildings, there is somebody who sees ... I mean, these are babies. So their vision of themselves may be overly great, in the sense that all my middle schoolers do believe they are going to play professional basketball and football. Or they may be under, and 'I'm never going to go to college. Why would I go to college? Why do you even think I can go to college?' So love has to be at the center of any educational program, whether it's called love, or whether it's just behavior that somebody who loves you or deeply cares about you would exhibit.